When Brian Kossof, founder and president of Concealed Carry of Illinois, began offering Illinois State Firearm Safety and Concealed Carry classes in September of last year, the room was filled with men and perhaps a handful of women. “To be honest, I wasn’t at all surprised by the male to female ratio,” says Kossof, a Highland Park resident whose interest in firearm safety prompted him to become fully licensed to teach at the state certification level. “For the first few months, men definitely dominated the classes, which is what we all expected,” he says.

But then, a very noticeable change occurred. More and more women, as well as seniors, began registering for Kossof’s course. “It was interesting and exciting to see this kind of a shift” says Kossof, who noted that many of the women came with a female friend or accompanied their boyfriends or husbands. The seniors (the oldest of whom was in his 80s) either attend on their own or with a family member (typically a son or a daughter).

“In our experience, we noticed that women and seniors are primarily interested in educating themselves about gun laws and learning about firearm safety,” explains Kossof. “They aren’t necessarily taking the course to carry a firearm,” he adds. “However, they do want to know that they can safely handle a gun and protect themselves should the need arise.”

Kossof offers 16-hour, 2-day courses, which cover firearm safety and provide the gun safety requirements and firearm training needed in order to apply for an Illinois concealed carry permit. He also offers 8-hour, 1-day advanced courses, which are ideal for those with prior firearm experience such as former members of law enforcement, military personnel, and armed security professionals who want to obtain their concealed carry permit. 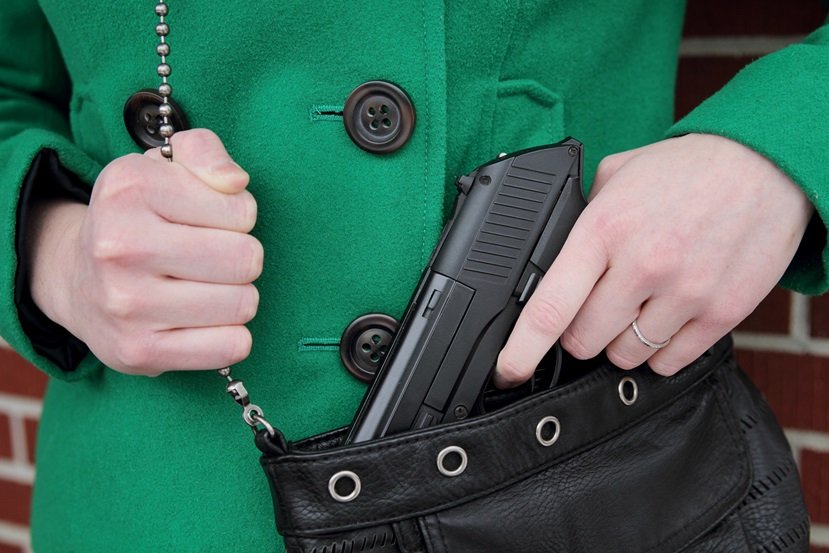 “We’ve found that a majority of women and seniors in our classes have never held a firearm before,” says Kossof, whose course includes hands on firearm training at an approved shooting range, as well as a variety of “real-world” scenario tests to sharpen the participant’s ability to react properly, accurately and responsibly.

“To be honest, most people are a bit nervous when we first get out on the range, especially women and seniors” he adds. “It’s unlike anything they’ve ever experienced before and our instructors understand that,” he continues. “If we need to take it slow and give them time to adjust, then that’s what we’ll do. We want them to be confident loading, holding and shooting a firearm.”

Before you can even apply for a concealed carry permit, you must first pass the Illinois State Firearm Safety Exam, which is given at the end of Kossof’s classes. But, not everyone receives a passing grade.

“My trainers and I take our roles as certified instructors very seriously,” says Kossof, who for a number of reasons, has had to deny approval. “I need to know that my students have mastered everything necessary to safely carry a firearm,” he adds. “Interestingly enough, almost all of the women and seniors who have taken my class have passed.”

“I purposely chose locations that would provide comfortable classroom style seating and upscale amenities,” said Kossof. “Most places have their students sitting in metal folding chairs with a clipboard on their laps for taking notes,” he adds. “I selected our locations based on where I’d want to take a class, and I know my students appreciate it.”

Kossof also offers private classes for those who prefer the convenience of their home or office. “Many have chosen this option for their employees, family members or friends,” he says. “Our instructors will come to them during the week, on weekends or in the evenings – whatever works best for them – and conduct a 1 or 2-day class,” says Kossof.

Concealed Carry of Illinois’ 1-day course is $200, and the 2-day course is $375. Classes are limited to no more than twenty people and include the NRA Basic Pistol Course, targets, supporting literature, books, and other class materials. Online registration is available and highly recommended. For further information, please visit Concealed Carry Permit Courses or call 847-322-6800.

FYI: The Illinois Firearm Concealed Carry Act became law on July 9, 2013, with the first permits issued in March 2014. According to recent statistics, approximately 12% of the concealed carry applications are from women, with the numbers expecting to rise. Nationwide, the number of women who own guns has grown from 13% to 36% (from 2005 to 2012, which are the most recent stats). In 2012, 38% of people age 65 and over reported owning a gun.